Interviews come in many shapes and sizes. Some over the phone, some are in front of a panel, and some feel similar to The Hunger Games taking place with a group of candidates. Even though every interview is unique, there are some things that never change. Things like useless questions that come up time and time again; but we have to ask ourselves, “Why?”  Below, we’ve come up with a list of the worst offenders for dead-end interview questions. Read through the list and leave any you think we missed in the comments below!

Where do you see yourself in 5 years?

Anyone answering this question basically has two options:

Option 2: Serve up a huge turn off to the interviewer.

In option one, the only correct answer would be for the candidate to say that they’ll still be working for the same company (because, obviously, they’re loyal as all get out), and that they’ll have significantly helped the company grow (because they’re awesome) and become more efficient (because they’re smart). In option two, they could be totally honest and say that they hope to have your (or the interviewer’s) job, be working at a larger company, or living the dream and working from home full-time.

Instead, a better question to ask may be, “How do you see yourself contributing to the success of our company?” That is the important thing, after all. Even if the candidate hadn’t thought about and rehearsed the answer to this question before the interview, you know they’ll be thinking about their contribution and their role in your company now.

What was the last book you read?

This may or may very much not give you insight into a candidate’s personality. The candidate may feel the pressure to answer with “Selling the Invisible: A Field Guide to Modern Marketing” but that answer might just be too good to be true.

Many different people like many different books- or don’t like them! Have you ever read a book that a friend recommended or that you picked up because it had  “Best Seller” on the cover but ended up hating it? Chances are, that book couldn’t tell anyone a thing about your personality and it may even give someone the wrong impression altogether. Many people also like to read fiction or fantasy novels. If you think that if a candidate has read Fantastic Beasts and Where to Find Them they’ll make a great Product Manager, then ask away. Otherwise, we suggest just asking what a candidate likes to do in their free time.

What is your greatest weakness?

Unless you really expect your candidate to tell you that they’re scatterbrained and unorganized (or worse), 9 times out of 10, the answer to this question is a lie or at the very best, a half-truth. Of course, every candidate is going to want to put their best foot forward and make the most positive impression possible. Most candidates by now have Googled appropriate ways to answer this question without incriminating themselves. You’ll probably hear something like, “I tend to be a perfectionist” or, “I used to lack organizational skills but since completing my degree, I’ve learned how to manage my time wisely.” While these answers might be the safe option for the candidate, they can’t tell you if they will or won’t do the job well since the candidate and choose whatever answer they’d like you to hear.

Instead, try to think of a scenario question that would allow your candidate to open up about a time when they may have failed but took responsibility for it and resolved the issue. An example may be, “Tell me about a time you dropped the ball at work or at school and how you handled it?” By asking this question, you’re seeing into some of your candidate’s weaknesses (did they miss a deadline? Overlook a detail? Run a project into the ground because they skimped on the research?) but you’re also learning how (or if) they take responsibility and find solutions to problems.

Ok, so these question may not be entirely useless. Unless you’re asking, “How many garbage cans are there in New York?” That’s useless.

Oftentimes, employers will use strange or complex logic questions to surprise a potential employee and get a glimpse of how (or if) they’ll think on their feet or to determine if they’re a good culture fit. Instead of looking for a right or wrong answer, they’re looking to see if the candidate can perform well under pressure and how they do when trying to solve brand new problems. Patrick Brandt, CEO of Zimbra Inc. says he likes to use open-ended, unorthodox questions to get the interviewee away from the rehearsed, typical job interview questions and into a conversation-like dialogue. So while these questions are not all bad, they should be used with caution.

The lesson here is, don’t ask oddball questions just to watch a candidate squirm in their seat. If you use a seemingly out of place interview question, just be sure there’s a purpose behind it and that it will actually tell you something about your candidate. Overall, these questions may give you a feel for how a candidate thinks, but not necessarily how well they can do the job. If you feel the itch to use one, use it to break the ice into an open conversation.

What would your past managers say about you?

In this scenario, unless the candidate just recently had their annual employee review, it’s hard to know what a manager really thought of them. Their answer to this question would most likely come from speculation or random pieces of feedback they may have received during their time at the company. The worst case scenario would be that the candidate had a manager that didn’t like them at all in which case your interviewee would feel the need to come up with a quick lie. Instead of asking this, it may just be more effective to contact your candidate’s references and ask them specific questions about personality and how your candidate performed in their previous role.

What are your favorite job interview questions? Leave your go-to’s in the comments below and share the post if you hate oddball logic questions too! 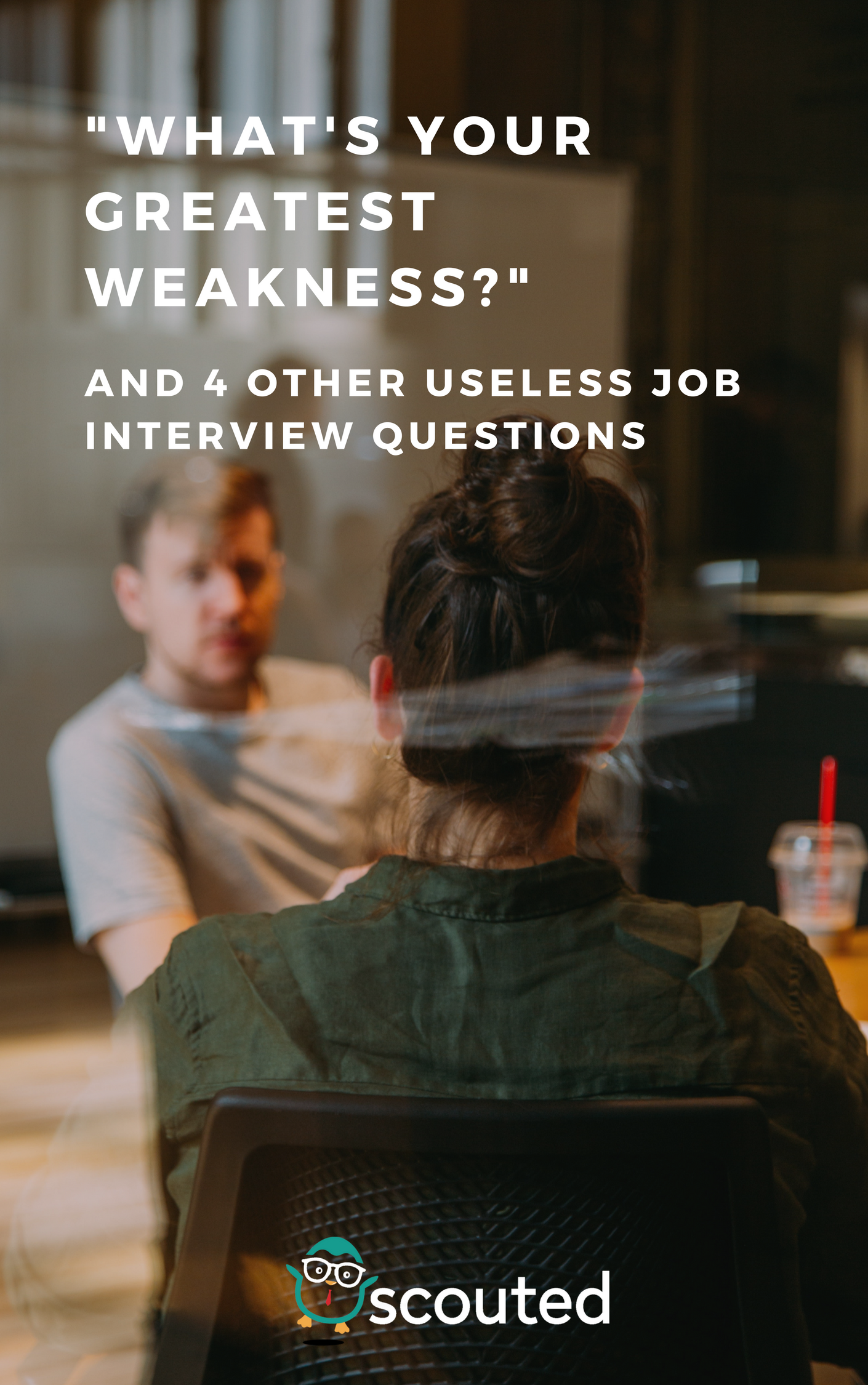 Despite the passage of major legislation and an arduous fight for parity in the workplace, women still make less than their male counterparts. Why women make less is clear: unfair systemic policies prevent women from reaching their fullest potential. What’s less clear is how we can unravel decades-long disparities in the workplace -- and how we can implement equitable policies for all employees.

By Sarah Schultz in Companies

Millennials are forecast to make up nearly 75% of the global workforce in the next five years are more loyal to companies that invest in their future leadership potential within that organization. Ready to offer your team developmental benefits but not sure where to start? Read on.

By Team Scouted in Companies

A Strong DEI Policy Will Help You Outperform — Here’s Why

You would never trust your assets in only one type of investment, so why would you hire a homogeneous team to lead your company? Just as diversified investments are smarter and reduce risk, the same goes for diversified teams. Simply put: representative teams, make better teams.

By Jacqueline Loeb in Companies

Ready to embark on your next career?